In June of this year, box offices in the US hit a nice milestone that made multiple studios, theater owners, and moviegoers satisfied for at least one weekend. For the first time since 2018, the top 4 films have all grossed over $20 million each (along with 5th place coming in close with $17.66 million). What’s the source of this success? Quality films help, but in this case, the keys are product diversity and engaging the older audience.

The top four films of the last week of June included Elvis, Top Gun: Maverick, Jurassic World: Dominion, and The Black Phone. Each film over-indexed on specific demographics that were unique from the others. Top Gun: Maverick and Elvis brought in the older demographic that was previously wary to return to theaters, while Jurassic World and The Black Phone were popular options among the younger moviegoers. Elvis skewed heavily female, The Black Phone was able to appeal almost equally to both men and women, while Jurassic World and Maverick both brought men to the theaters. These four films also have wildly different genres from science-fiction, action drama, musical biopic drama, and supernatural horror satisfying any type of adrenaline a viewer wanted for the weekend.

The success of each film doesn’t only come from the films’ qualities and audience targets. Despite wildly different genres, all the films had recognizable talent (Tom Cruise, Tom Hanks, Chris Pratt, and Ethan Hawke) along with banking on Intellectual Property such as the Top Gun and Jurassic franchises, Elvis Presley and the directing style of Baz Luhrmann, and a short story from Stephen King’s son and the director behind Sinister and Doctor Strange.

Previous models gave us close to 31 million active moviegoers who go to the theater from a few times a year to once a week as well as their demographic breakdown. We compared them to the general population to see what differences production and marketing can consider when creating or promoting their content. 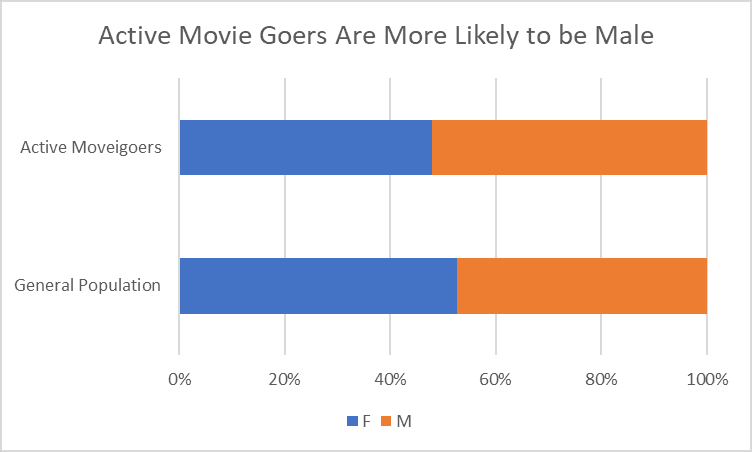 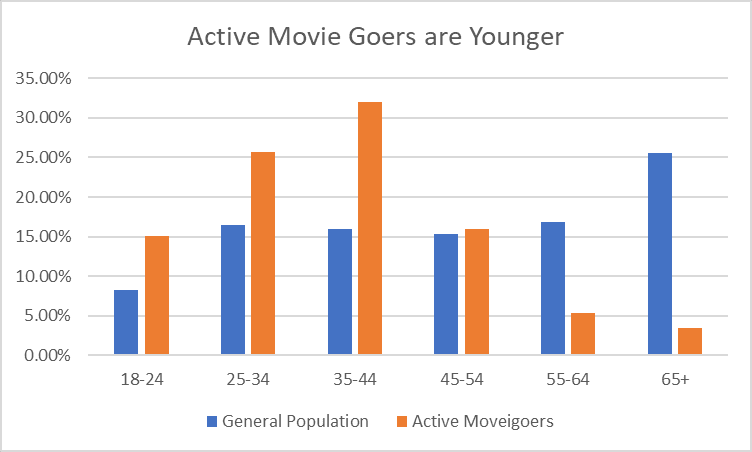 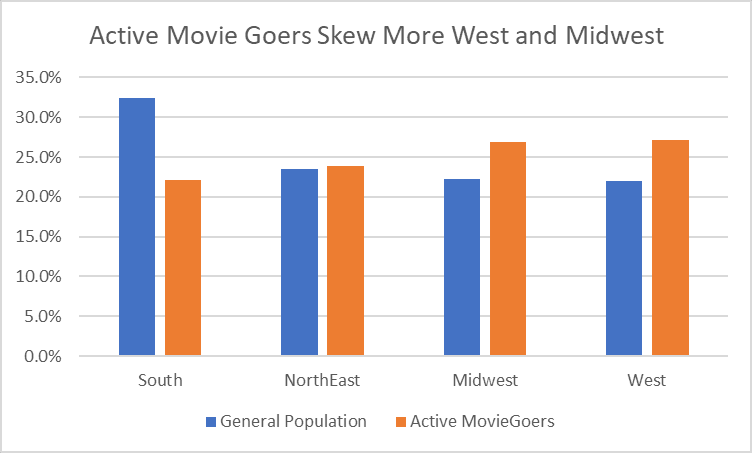 These active viewers will be your reserve targets. They don’t need that much convincing to see a movie, but they do need a push to see your movie.

A key to the successes of Maverick and Elvis lies in their appeal to an older audience. 55% of the audience in Maverick’s first weekend were over 35 and 30% of Elvis’ first-weekend audience was over 55. Furthermore, Maverick was able to over-index for older moviegoers in states outside of the normal western L.A. and Northeastern New York City areas. Over-indexing both regionally and demographically, along with good reviews and word-of-mouth, Maverick was able to cruise its way to the billion-dollar club for blockbuster films.

So how many people can we tap into from this older demographic for the future? In our modeled active moviegoers, about 56% are over the age of 35 and about 25% are over the age of 45 which translates to approximately 17 million people watching a movie in theaters at least a few times a year. Extending this modeling out to even moderate moviegoers, it grows to 60 million potential audience members.

Now that we understand the audiences of these films, how can we get them again? An obvious answer would be replication, waiting for Top Gun 3, another music biopic, or the next Blumhouse Production horror film. But what if you want to be more proactive than that?

A significant portion of a film’s success is the marketing campaign. Who is promoting the film and on which platform? However, the questions that Causeway Solutions asks are “who are we promoting to?” and “how do we promote it to them?”

For instance, our internal data can find the number of people who are not only modeled active movie goers but are also active live tv viewers. Do these viewers coincide with whom we want to reach to see the next action drama that wants to capitalize on Top Gun’s success? If they do, a TV spot in those markets might be the way to go.

We can also see the modeled active social media users. Do these users coincide with whom we want to reach to see the latest horror flick? If so, a push to those platforms is the way to go. 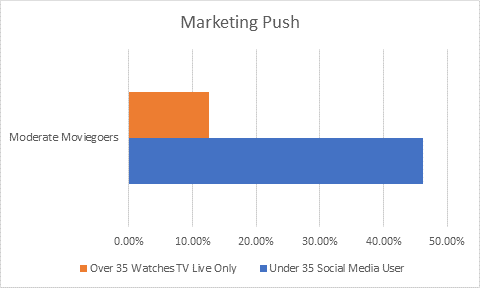 Other considerations for key film research are as follows: Is there a common action audience that we can reach out to? Are the people who enjoyed Bohemian Rhapsody just as likely to enjoy Elvis? Will an older audience or non-active moviegoers venture a trip to the movie theater to see a specific film? These questions and more are what we need to delve into with further research and analysis when figuring out the perfect audience for each film.

Our work can break down all these questions to figure out exactly who we can reach out to and how. Is there a significant amount of people in your audience for the project to be worth it? We can find them and find out what is needed to get their attention and persuade them.

Getting your audience at the right time with the right message might just be the final ingredient to achieving success. Finding your distinct audience potential can help you succeed amid a crowd of competitors and having a persuadable quality product or message can increase the likelihood your target audience hears you. With quality data, thorough analysis, and a dedicated message, all available from Causeway Solutions, we can help create excellent weekends for your businesses.