Fantasy Football attracts more than 60 million people worldwide and contributes to nearly 70% of all Fantasy Sport participation. At its core, Fantasy Football is a game that tracks an athlete’s performance and assigns a score to it. Each player drafts athletes, emulating a traditional NFL draft, until they fill their team up. Throughout the NFL season each fantasy team will play head-to-head and whoever’s team scores the most points wins. While Fantasy Football is traditionally viewed as a game of luck, the strategy does play a large part in winning a season.

Causeway Solutions, using Yahoo! Fantasy Sports, had our inaugural Fantasy Football season in 2021. One of the great things that Yahoo! provides fantasy players is their up-to-date analytics and reporting. When the season began, Yahoo! graded each player’s draft and assigned it a score. Along with that score, Yahoo! predicted how the regular season would shape up.

How the regular season unfolded turned out to be vastly different than Yahoo!’s prediction. 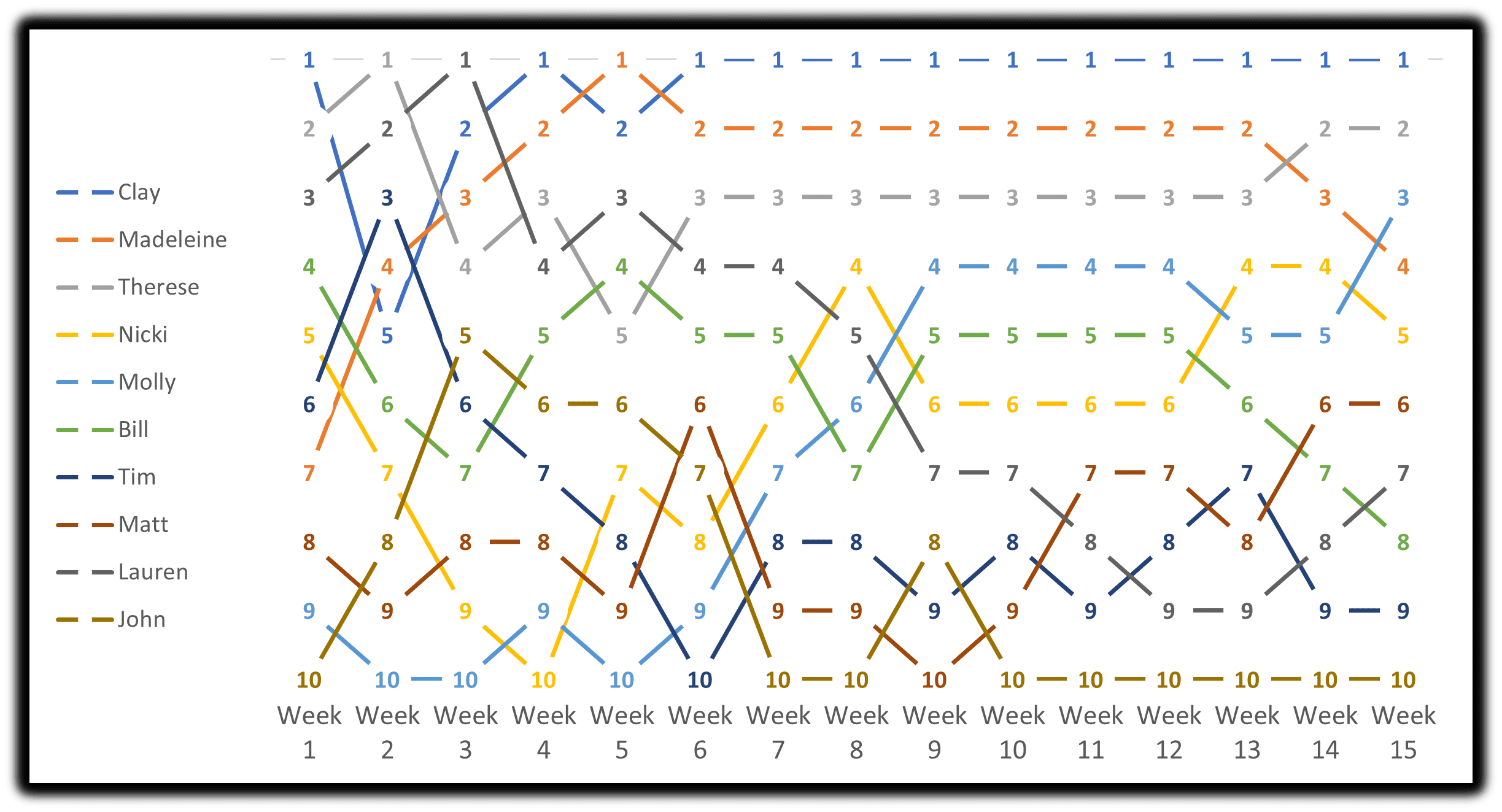 This graph displays the movement of each team over the course of the regular season. At the beginning of the season, we can see that the graph is very noisy. Although the movement of teams is very volatile early on, as the season progressed, we saw the standings start to take shape. After week 6, volatility drastically reduced, and teams began moving up or down only one to two spots a week. The longer the season progressed, the less volatile the standings became. Along with volatility, the season-long standings also show how early-season success does not always translate to late-season success, and vice versa. 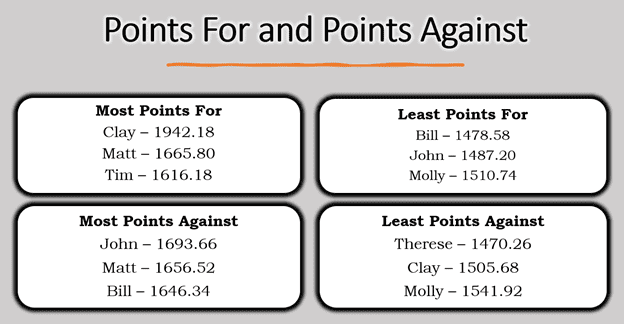 Another stat to look at while determining the true strength of a team is the average margin of victories. The Mad House vs Jersey Sure matchups are great examples of how slim scoring margins can affect the overall season standings. The Mad House, who ended the regular season 4th, beat out Jersey Sure by a total of 3.64pts. To put that into perspective, the average margin of victory throughout the season was about 30.09pts.

When looking at the best-performing players, a few important trends become clear. The first and second-place teams in the regular season reflect that importance. The team that ended the regular season in first place had a combination of the best running back and the best wide receiver. Along with that, the second-place team had the combination of 2 of the best 3 running backs. These combinations contributed strongly to the overall success of the teams.

Throughout the NFL season, many serious injuries occur and can sit players out for weeks, months, or even years. Injuries are one of the major factors that a fantasy owner has to consider when drafting a team. Injuries in the NFL are very common and preparing for your star player to be out for a couple of weeks is key. As seen in the graphs above, Tim had a strong replacement for his #1 draft pick Christian McCaffery and this depth allowed him to maintain his average scoring. On the other side, Madeleine lost her #1 draft pick Derrick Henry, resulting in a steep decline in performance. Although Madeleine had a steep performance decline, this is not entirely because of a lack of depth. Derrick Henry is known for his consistent top performances and no amount of depth can truly replace him. 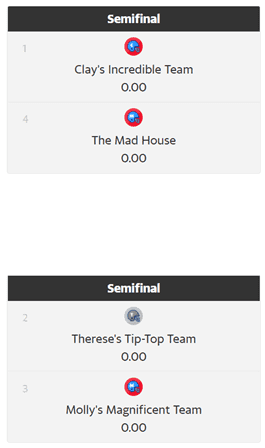 The playoffs consisted of the top 4 teams of the regular season and lasted two weeks. After the two weeks of football, the champion was crowned. Winning the inaugural season was The Mad House. A major point to look at is how close The Mad House came from slipping out of playoff contention. The Mad House was one loss away from dropping to 5th place. The two wins over Jersey Sure by a combined 3.64pts allowed The Mad House to make it in the playoffs at the 4th seed and eventually be crowned the winner.