From the Highest Highs to the Lowest Lows: Biden Approval

From the Highest Highs to the Lowest Lows: Biden Approval

If you have been paying attention to the news lately, you have probably heard about President Biden’s approval rating dropping to the lowest it has been since he took office. The current state of the economy, an international crisis, and how Biden has been handling these issues have made a big impact on his ratings. No surprise, as people’s opinions of Biden decline, the rest of the Democratic party has taken a hit as well. Fewer voters are sympathizing with the Democratic party and people’s willingness to elect generic Democratic candidates has weakened.

Where Did Biden Take the Biggest Hit?

Many states that had voters with the highest opinions of Biden quickly took a big dip in approval. According to our modeling, Biden’s net approval rating fell 4.7 points between June and December while Democratic party association and willingness to vote for Democratic candidates also fell 2 points within the same time period. The area that had the biggest dip in Biden approval was D.C. Biden’s approval rating was at 41.4% in the summer, but by December, it had fallen 10.5 points to 31%. Other dips in approval were not as severe, with the other 9 states only averaging a 5.4-point decrease.

Who Has Biden Lost?

White voters are the unhappiest with the job that President Biden is doing are the only racial group that had a drop in approval. White voters also had the biggest decreases in Democratic party association and on the Democratic ballot where both lost 7 points between June and December. On the other hand, Black and Asian voters actually increased their Biden approval; Black voters are up 2.7 points and Asian voters are up 3.6 points. When looking at sex, male voters had a 1.8-point drop in Biden approval while women remained relatively the same.

Given Biden and the Democratic party’s changing stance on student loan forgiveness, it is not surprising that voters 18-34 also had a dip in approval. 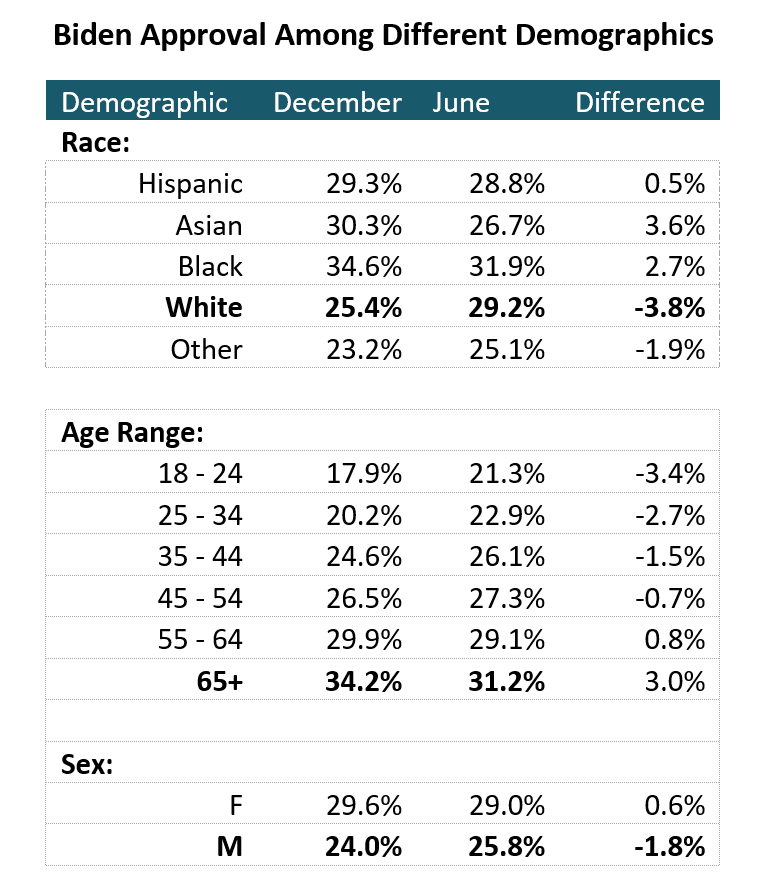 In April, we will be retraining these models and it will be interesting to see how Biden’s approval changes given recent events not only in the United States but around the world. As the midterms approach it will be particularly interesting to see Biden’s disapproval impacts the Democratic party.