Beginning in June of 2021, Causeway Solutions conducted 5 independent surveys as part of our monthly newsletters’ research study “Instant Insights.” Although each study focused on a new topic, we also included questions that we repeated each month to measure attitudes over time to monitor changing behavior. As 2022 begins, see how consumers’ attitudes have flipped and flopped since last summer.

Key issues stay the same, but their importance changes.

One of the most noticeable shifts we’ve seen over the past few months is the subtle shifting of the importance of COVID recovery in people’s lives. In August, 40% of those surveyed believed COVID recovery was the most important issue in the country. Today, that number has dropped to less than 25%. Each month we saw this percentage decrease with the largest drop occurring between October and November, possibly due to considerations around the incoming holiday season. Although it is still a top issue, COVID recovery is no longer number one. With recent surges and holiday gatherings, it will be interesting to see what the responses are next month.

The issue that increased the most consistently was the economy, where over a quarter of people believe it is the most important issue today. The economy overtook COVID recovery as the most important issue for the first time in November. Other issues that have fluctuated near top importance included increases in concerns for healthcare from September through November. The importance of the environment also increased every month since October. We will be sure to continue to monitor these issues in the coming year.

Satisfaction with how things are going is on the decline.

Another shift we’ve seen is the overall satisfaction about how things are going in the United States. When asked if they were satisfied or dissatisfied with the way things are going at this time, over half of those surveyed said they were very or somewhat satisfied in August. Fast forward to December and that number has dropped from 53% in August to only 40% in December. This shift toward dissatisfaction started in November and was accompanied by an increase in those that say they are unsure going from 4% in August to 10% in December. Although we do not know all of the factors behind this shift, we can see that a significant number of Americans are dissatisfied with the state of current affairs as we move into a new year. 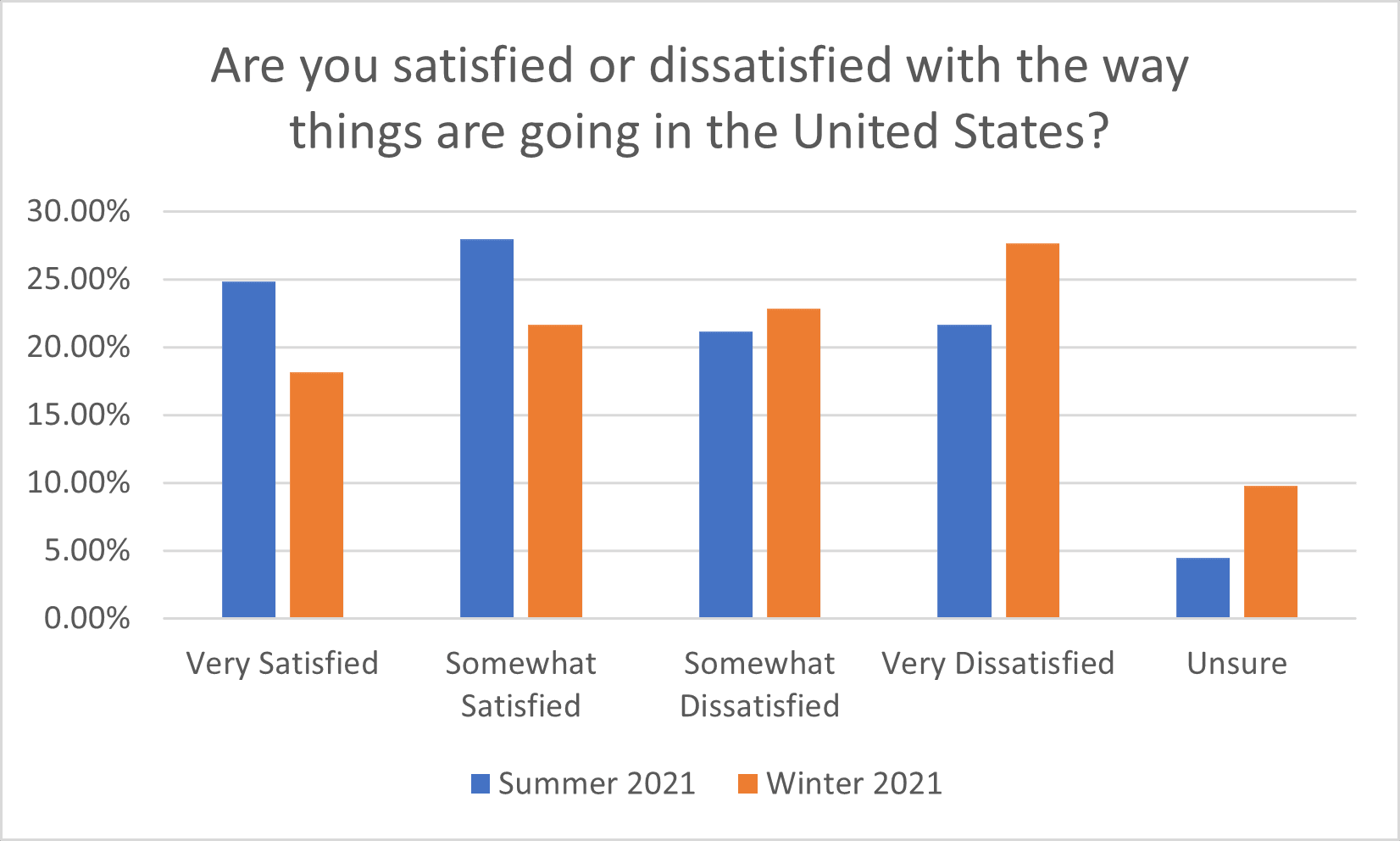 Confidence follows in the footsteps of overall satisfaction with the US.

On a lighter note, every month we include a “fun” question related to the time of year or the theme of the poll. We cannot trend these results, but we can give you some great fun facts for your next gathering! In August, we asked about the popularity of sports, and while it was no surprise that football is the favorite sport to watch, basketball, baseball, and not watching sports follow closely. In October, we found out that Reese’s peanut butter cups were the #1 Halloween candy at a 38% plurality. In November, we asked about favorite medical TV shows where Grey’s Anatomy won first place but was only a few points ahead of The Good Doctor. In December, we asked about Holiday Movie favorites, and Home Alone won by a small margin, while It’s a Wonderful Life, How the Grinch Stole Christmas, and White Christmas all tied for a close second. And finally, as New Year’s approaches, we could not resist asking about resolutions. We learned that 2022’s New Year’s resolution plans showed that about a quarter of those surveyed are focusing on self-care in the new year, about a quarter on accomplishing more, and about a quarter are not making any resolutions at all! Keep checking into Causeway Solutions in 2022 to learn about how consumers feel about the world we live in as well as the things they enjoy!