Red vs. Blue vs. Green: The Electorate on the Environment

Red vs. Blue vs. Green: The Electorate on the Environment 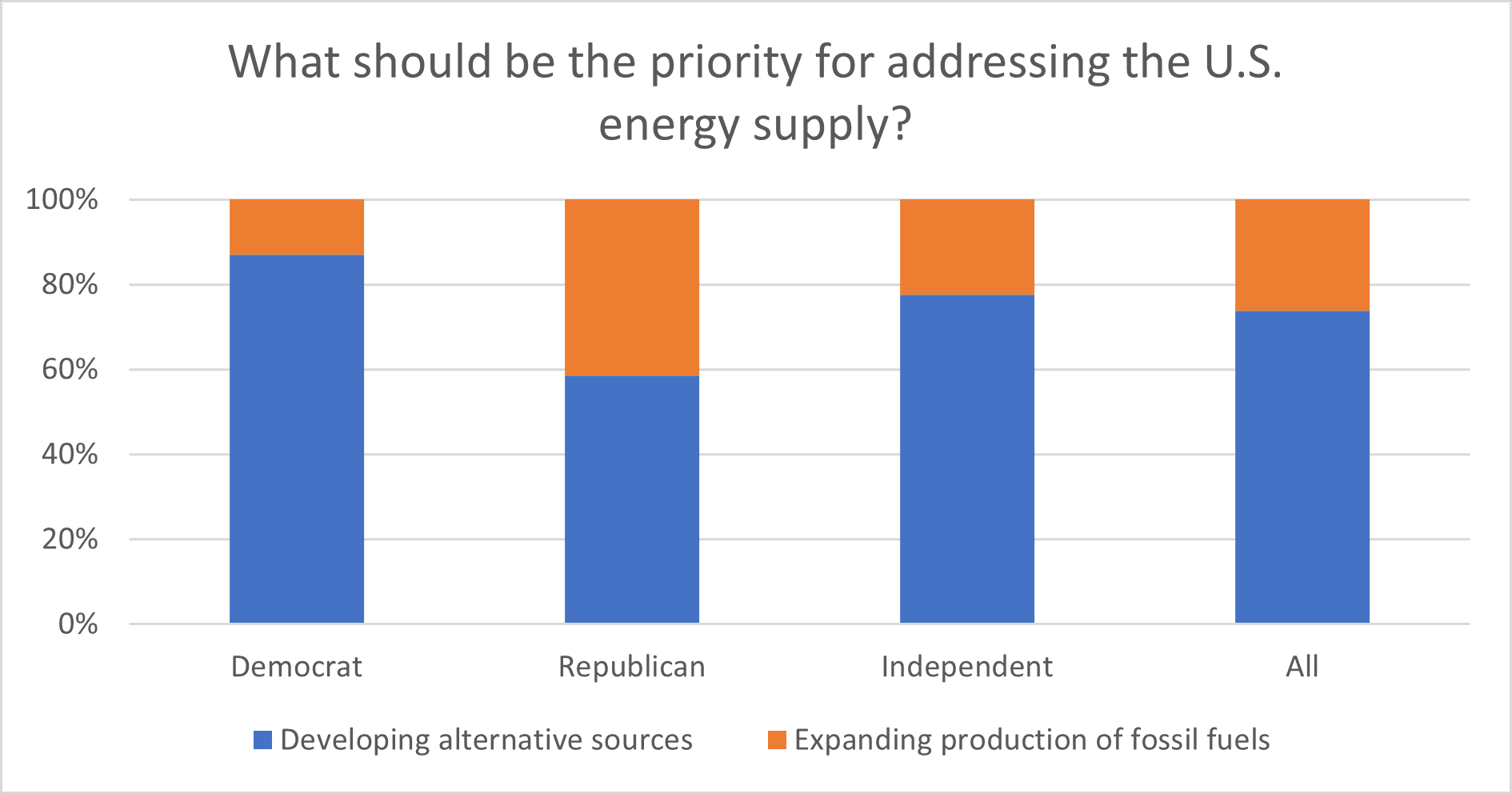 When breaking down the details of energy sources, the trends become slightly more partisan, but still, some interesting overlaps appear. All three groups favor expanding nuclear power plants, solar panel farms, and wind turbine farms along with all three opposing the acquisition of oil from foreign countries. Averaged together, the electorate overwhelmingly favors wind turbine farms and solar panel farms at 84% and 90% respectively followed by nuclear power plants at 64%. These results correlate with the overall majority support of alternative sources like wind and solar in the last decade and are even higher than the results in 2019 and in the past decade. For nuclear energy specifically, though, these results show possibly an overall positive shift in support, up from the support trough of 2016 (44%) and about the same as the nuclear energy support peak of 2010 (62%).

However, when asking the whole group their favorability on existing sources of energy like oil drilling, coal mining, and fracking, partisan differences do appear. Republicans favor expanding each of those sources, while Democrats are more likely to oppose them. Independents are more evenly split, with slightly more opposing drilling in U.S. waters and coal mining but more favoring drilling on U.S. soil. Averaged together, the overall electorate is slightly more favorable towards oil and gas drilling in U.S. waters and soil (55% and 59%) along with coal mining (51%) and slightly more opposed to fracking (51%).

Supporting the Environment in Everyday Life

Everyone is putting in some effort in their everyday lives to help the environment. Eighty-nine percent are recycling, 80% reducing food waste, 73% using fewer plastics, and 65% reducing water use. Republicans, Democrats, and Independents are all taking part in these activities at similar rates, with Republicans only about 1-5% less than the overall average, Democrats 4-5% more than the average, and Independents lining up close to the average. More than half of the Democrats and Independents are driving less/carpooling at 66% and 60%, but Democrats are still the most likely to eat less meat at 53%. Still, over a third (37%) of Republicans are eating less meat or driving less/carpooling (49%), showing the issue is not as partisan as one might believe.

When broken down by party, all three groups have similar beliefs around the impact of natural patterns on climate change in general and “greatly”. The differences are seen when it comes to the impact of human activity. Democrats are significantly more likely to believe that human activity “greatly” impacts climate change at 77% versus Republicans at 41% and Independents at 57%. Climate change is important to everyone, but nuanced messaging will align with different audiences.

Although political issues tend to split the electorate in half, issues pertaining to the environment are not as cut and dry. Political divides do exist for continuing the use of fossil fuels or to what extent human activity contributes to climate change, but they seem minimal compared to the surprising amount of overlap between the left and the right on other environmental topics. Republicans, Democrats, and Independents all support developing and expanding alternative energy sources and are incorporating more environmentally friendly processes in their everyday life like recycling, reducing food waste, and more. With this overlap in support and habits, campaigns moving forward need to acknowledge that the environment is an issue that continues to be important with interest from Republicans and Democrats alike but understanding the differences within this shared concern will allow your message to resonate with whichever audience you are speaking to.